Nick Adams recalls:- As a member of a local group, Storm, we used to rehearse in the hall each week in the evenings from around 1972 to 1976 when Horace Hawker was the caretaker. We were told that we could be heard in Axminster on occasion (of course, you don’t permit it now). Back then, the entrance was double doors at the top end, and there was very little heating in the hall, sometimes they paid extra to turn on the two (I think) heater bars. I believe we used to occasionally store one of our speaker cabinets in the kitchen between adjacent rehearsals. 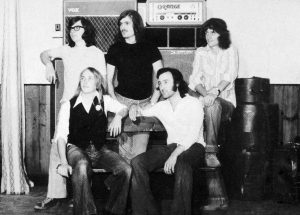 We wrote original material e.g. Roadrunner, Florentine Blues and Illusion. We also made a demo tape of five original songs at Arny’s Shack studio in Bournemouth including the track Illusion

We gigged locally, which meant anywhere from Torquay to Barnstaple to Weymouth or thereabouts including two Axminster Carnival gigs in the Guildhall with Derek Real’s disco. Storm got to the semi-final of one of the Bass-Charrington talent contests, playing at Pontin’s Brean Sands Holiday Camp to an audience of 3000+. We came second. The winners were a country band called Denver Spur.

With the easing of COVID-19 lockdown, Woodbury Community Hall is now fully open. Please make your bookings via the the booking phone number - 01297578057 or using the online initial booking enquiry.

We are retaining the sanitising stations at the entrance and in the kitchen.

Iconic One Theme | Powered by Wordpress